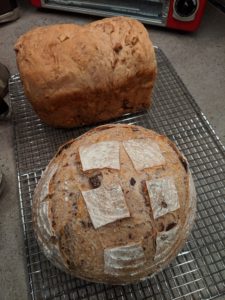 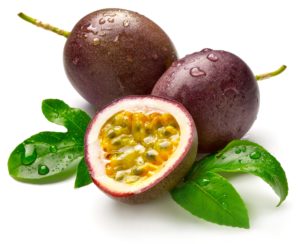 It’s passion fruit season so we used fruit from the liliko’i vine in our back yard to flavor our big batch. We added some sugar and water to the passion fruit puree and used 1/4 cup and 1 tbsp sugar (the buch was strong) to flavor. The small batch we made into our usual house buch with 1/2 tbsp of sugar. We’ve been letting the passion fruit go about 5-7 days in second fermentation. It has been turning out great! 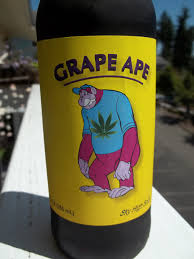 While we usually blend in some green tea for this SCOBY family, I kinda forgot and went with 14 grams of David’s Breakfast tea. It looked pretty dark. This is definitely our blackest tea and almost makes a strong (vinegary) buch. Temperatures have been in the 90s this past week and after 8 days our previous batch using this tea was not used. Temperatures are cooling off now so we will ferment this for eight days as usual but we will flavor it with something that complements a strong buch.

We harvested this on 9/30 for a nine day first fermentation. We bottled it in #21-26 with 1/4 cup of Concord Grape juice and the usual tbsp of sugar. We’ll do a five day second fermentation. 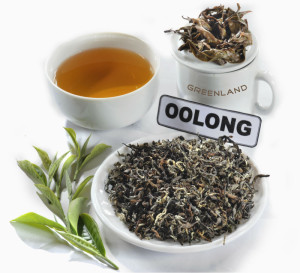 For this batch we used 23 grams (more than the typical 15 g of DavidsTea) of Oolong tea from Rainbow Grocery.

We first blamed the light color on the fact that our first loose leaf Oolong was from Rainbow Grocery but DavidsTea Oolong used in our next batch was no darker. We harvested this on 9/16 and flavored 4 bottles, #91-94 with just 1 tbsp of sugar. It tasted light and still sweet so we’re looking forward to trying it after a nine day second fermentation. 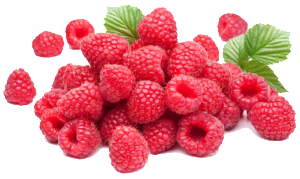 Darjeeling tea is a tea from the Darjeeling district in West Bengal, India. For this batch we used 10 cups water, 5 Tazo Darjeeling tea bags, 1 cup sugar and 1 1/2 cups starter buch. 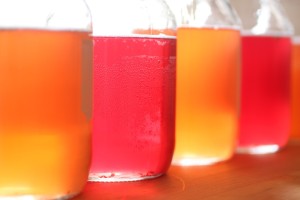 This is our English Breakfast and green tea blend. We are experimenting with reducing the amount of tea so for this batch we used 3 bags of Tazo English Breakfast and one hand-packed bag (probably double) of loose leaf green. We also increased the sugar from 3/4 cup to a full cup. We are now using 1 1/2 cups of starter buch.

We harvested this on 8/19 after eight days. We added only a tbsp of sugar so that we could taste this new blend. This probably isn’t a good test of 4 bags because the green bag was double so this is more a test of 3 EB bags and 2 green.