After years of making our house sourdough the same way (too dry), we’re now playing with a few things including the amount of water (more is better but without a loaf pan, the boules tend to flatten when they come out of the basket) as well as a technique Babs found that makes holes inside (stretch out thin and fold over and over loosely). We’re also playing with how often to feed the starter and when the last feeding should be before making dough. We’ve stopped doing punch-downs and are going straight into shaping baskets next to the fire. They usually rise in about three hours. We’re playing with rise time too. It’s hard to tell when they are ready for the oven but we try to catch them toward the end of the rise (not after it’s finished or too early). All of these things are critical and we need to be careful not to get stuck in old habits like we did when we first started. 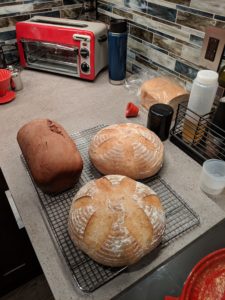 Today we made some more house bread (2 rounds) and a chocolate chip machine loaf. Here’s our Chocolate Chocolate Chip Bread recipe. It’s one of our favorites. I want to try a quick bread with banana and chocolate soon, or maybe just add some banana to this recipe.

Update: Hmmm, it just finished baking and it cracked on top. It also looks a little overdone on the sides. It didn’t seem to rise enough before starting to bake. I think with the extra kneading, chocolate and sugar it needs longer rise times, even with the Rapid Rise yeast. I think next time we’ll use ASF (Active Dry or the slower rising instant) yeast and do a 1 hr Rise 1 and a 2 hr Rise 2. We’ll see when we slice it if the 1:10 baking time was right. … ugh, we just sliced it and it pretty much sucks. First of all it tastes salty so I need to be more careful measuring. Next it has no chocolate chips. That’s right, by adding them early I beat them into non-existence. I continue to struggle with the additional ingredients. Especially with the chocolate chips, it’s less important that they be evenly mixed in than left intact. It was also overdone. So this was an epic fail in just about every way. Next time we’ll go back to the original recipe, using the Course 1 White setting, adding the chips at the beep, etc.

Today we made some house sourdough with the usual 320g starter, 420g water, 600g bread flour, 200g wheat flour, 2 tbsp sugar, 2 tsp salt. We let one round rest for a couple hours, punched it down and it’s been rising for about 3 hours now. Will bake that at 425 degrees, covered for 20 minutes with an additional 10 minutes uncovered. The other half of the dough went back in the machine for some sandwich bread or toast. I’m eating that now, toasted with some butter and raspberry/strawberry jelly. Good stuff!!

We’re also doing an Apple-Cinnamon-Pecan loaf in the machine with the following ingredients:

We’re also making more dessert breads today. The cranberry-orange-pecan quick bread came out great, maybe a little sweet but otherwise awesome. I’ll do that one again with less sugar. I also want to do a chocolate bread and another apple.

Tis the season for quick breads with fresh cranberries and apples! Becky took Babs apple picking and they got a lot of good ones! We tried the Zojirushi recipe for Apple Cinnamon bread and it was pretty good but it contains buttermilk and that seems to create a greasy crust. Today we are trying another simple recipe that uses milk instead. I made some changes to the recipe, adding a bit more cinnamon, sugar and apple. It’s a yeast recipe and hopefully a good place to start …

We used the bread machine on setting “Course #1 White” with medium crust and added the apples at the beep (5 minutes before kneading finishes). Unfortunately as we’re learning with all our added ingredient recipes, the bread machine doesn’t quite get it done. So from now on we’ll use the Homemade course and set the time for 1.5 hours until we figure out the exact times.

We also made a quick bread today in the machine. We used this recipe from ChowHound.com

I tried using the “Cake” Course of the bread machine but it didn’t get done enough so I had to finish it off in the oven. Next time I’ll use the homemade cycle. It turned out really good although next time we’ll reduce the sugar a little.