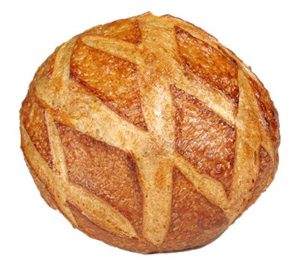 Today is the big day! We fed our refrigerated starter 3 times (way too much, will discard more next time) and are trying two methods, both from YouTube videos. The first is in the bread machine. I made a few tweaks to Jared Sergent’s video. Here’s my recipe:

Jared doesn’t bake in a bread machine but I wanted to try this set and forget “Homemade” cycle on our new bread machine. You need to keep an eye on it though.

Because we had a ton of starter after 3 feedings, we tried making some from scratch using a Cultures For Health video. Babs did this herself and we did it just as directed, using one 1.5 liter pyrex loaf pan and one 1.2 liter pyrex bowl. We’ll let proof at least 6 hours and put them in the oven. I like how this guy bakes. He first bakes at 450 degrees for 10 minutes with boiling water for steam, then reduces heat and bakes another 35-45 minutes.

Right now the bread in the machine has risen nicely and is about to start baking. We might be able to use more dough with the machine in the future. The loaves are also rising on the counter. We’ll let you know how they turn out!

The bread machine finished and the internal temp was around 109 so next time we’ll try 55 minutes OR use more ingredients! I think it could have been 1/3 bigger which means we might be able to use the Cultures For Health recipe in the bread machine. It does look ugly though so I have a feeling we’ll be baking in the oven. Maybe a little of both. Our loaves are rising nicely after 7 hours and we’re preheating the oven for them now. For tonight’s feeding I used 200 grams of each ingredient at 7:15 pm. That means I need to get up at 7 and either feed it or bake with it (I think that’s how it works). I discarded a lot, trying to get a handle on how much to discard on I guess the second or night before feeding. I’ll probably get up at 7 and feed it so we’ll have plenty of time to make dough, maybe after we surf.

We baked the loaves at 450 degrees for 10 minutes with a pan of water on the bottom rack. Unfortunately we didn’t know we needed to pour boiling water into the pan to produce the steam, so we have a very hard crust. While we were supposed to bake an additional 35-45 minutes at 375 degrees, at 35 minutes, they were definitely done. The inside measured 110 degrees, the max. You want between 190 and 210 with 200 being perfect. Better to overcook than undercook though because supposedly wet dough gets rancid. No worries for us on that as all our bread today tested 210 degrees. We’re not going to try the loaves tonight to keep them fresh but the bread from the machine is delicious! Ugly but yummy! The loaf and round look really nice, especially the loaf shape. We’ll try artisan style when we get our baking stone.